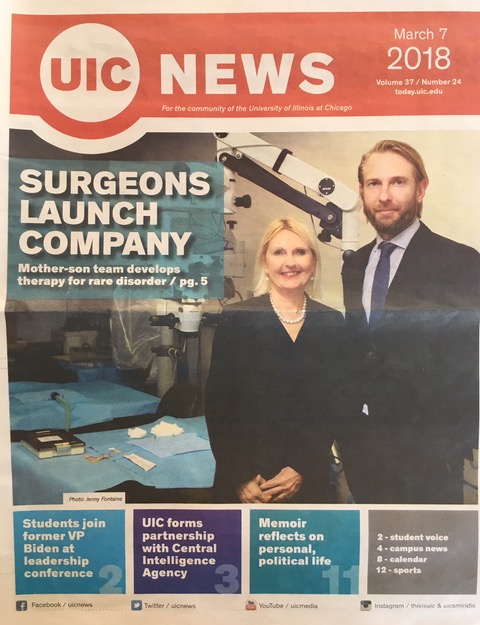 Dystrogen Therapeutics S.A., a Poznan, Poland based company, was established in February 2018 to develop therapies for patients with rare disorders. The company’s first candidate is a novel chimeric cell therapy to treat patients with Duchenne muscular dystrophy.

The company was launched by Drs. Maria and Kris Siemionow, who are mother and son, and are prominent surgeons and scientists with business acumen from the University of Illinois at Chicago.

Professor Maria Siemionow, MD, PhD, the company’s Chief Medical Officer, is an orthopaedic and reconstructive transplant surgeon appointed as a Professor of Orthopaedics and Director of Microsurgery Research at The University of Illinois, Chicago. She is a member of the academic-industry team known as the Warrior Restoration Consortium, which focuses on the development of clinical therapies and new treatments for wounded soldiers as part of the Armed Forces Institute for Regenerative Medicine. Professor Siemionow serves on the editorial board of nine professional society journals and is an ad hoc reviewer for six professional society journals. She has published more than 320 scientific articles and has edited three plastic surgery textbooks, two popular science books, and has contributed to 58 published book chapters. Professor Siemionow is recognized for leading a team of surgeons at the Cleveland Clinic Foundation that performed the first face transplant in the United States. Recently, in the ninth edition of the competition Businesswoman of the Year 2017, Professor Maria Siemionow was awarded the main prize in the category of science and business.

Dr Kris Siemionow, MD, PhD is the company’s Chief Executive Office. Dr Siemionow is an orthopaedic surgeon and serial entrepreneur. Dr Siemionow completed residency at the Cleveland Clinic Foundation in orthopaedic surgery and a spine surgery fellowship at Rush University Medical Center. He is a co-founder of Global Spine Outreach, a not for profit organization, whose mission is to “save children with severe spinal deformities”. Dr Siemionow co-founded Holo Surgical Inc, a medical technology company developing Synthetic Vision for Surgeons. He published over 50 scientific articles and holds 11 patents in various medical applications.
Prof. Maria Siemionow spent decades investigating the effect of chimeric cells – made by fusing donor and recipient bone marrow stem cells – on the immune system’s natural attack response to foreign tissues and donor organs. This has led to the development of Dystrophin Expressing Chimeric (DEC) cell therapy. DECs work by combining a malfunctioning cell of the Duchenne patient with a normal donor cell containing a functioning copy of the gene for dystrophin – a structural muscle protein lacking in people with Duchenne muscular dystrophy.

This offers a unique advantage and allows the patients’ body and immune system to accept the new cell without rejection. The new cell is composed of both donor and recipient structures and interacts with its surroundings like a normal cell. In such a way dystrophin producing cells have been created that can engraft inside the patient's muscles and increase their dystrophin levels. Increased dystrophin levels have been shown to correlate with improved functional outcomes in the mdx mouse model of Duchenne muscular dystrophy. These findings were recently reported in the journal of Stem Cell Research and Reports (Ref 1,2). This technology was developed at the University of Illinois at Chicago and was a subject of the US Provisional Patent Application no. 62/174,122 entitled “Muscular Dystrophy Chimeric Cells and Method for Treating Muscular Dystrophies” filed in June 11, 2015. An unrestricted exclusive worldwide license to the commercial rights was granted to Dystrogen Therapeutics S.A. in November 2017.

Dystrogen Therapeutics S.A. has applied for scientific recommendation on classification of Advanced Therapy Medicinal Products (ATMPs) and for designation as an orphan medicinal product with the European Medicine Agency (EMA). The evaluation process is pending.

Dystrogen Therapeutics S.A. received funding from StarFinder and private Investors to bring  chimeric cell therapy to clinical application in Duchenne patients. StarFinder is  a seed capital fund that invests in early stage projects with interest in innovation. The unique opportunity to work with StarFinder allows Dystrogen Therapeutics to expedite bringing new therapies from pre-clinical trials to clinical applications. StarFinder offers not only the financial support but brings experience in strategic development and a large partner network.

New investment round has just started. send us information about your project as detailed as possible.